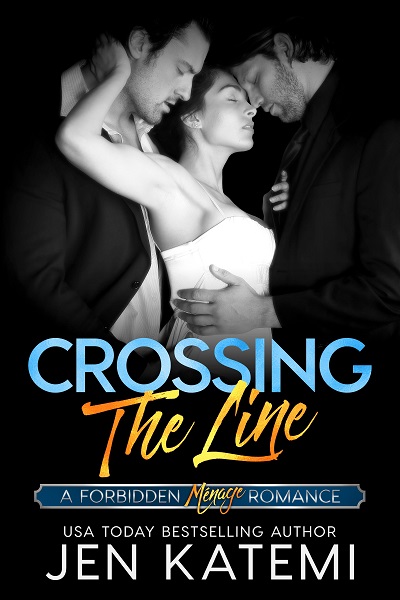 Sex. Love. Marriage. A ménage gamble puts everything on the line.

Tam  will do anything to keep his wife Jules happy…until her proposal for a sexy ménage tryst threatens everything he thought he knew about their relationship, and about himself.

Julia adores her husband Tam, but in this dangerous high-stakes game, is she risking too much for the future of their marriage?

Love is always a risk…but crossing the line comes with consequences.

This title was previously published by Evernight Publishing.

Click here to buy at your favorite eBook retailer.

Before I can even take in a breath and prepare myself for what might come next, Dom leans down and captures my lips in an exploratory kiss. It’s the first time in over twenty years I’ve been kissed like that by anyone except Tam, and it feels weird and wonderful, all at the same time. His mouth is firm and sure, yet there’s also a questing feel to his exploration. When the tip of his tongue grazes my still-closed lips I part them at the sudden flash that zings my belly. Butterflies, and more. So much more. He takes advantage and claims my mouth fully with his tongue. My clit hums to life so fast I moan into his mouth and my body collapses against his. His cock stirs into hardness. I can feel its thickness right there against my abdomen, and then his hands cup my arse and pull me even closer in to his body and the heat of that erection.

I have no idea how long we kiss, but when we draw apart I turn, automatically searching for Tam. He’s still watching from the same spot as before, but now his eyes are blazing with some kind of leashed emotion, and I can see his cock has begun to tent the white hotel robe he’s wearing. There’s an unexpected ferocity in his features that I’ve never seen before. He looks turned on, and enraged, both at the same time. I open my mouth then close it again, not sure what to say. My heart is racing and my clit is throbbing, but if Tam wants out now, then that’s what we’ll do.

Before I can try again to speak, Dom lets me go. He holds out a beckoning hand toward Tam. “I’m not taking your place, man, I promise. Tonight is about Jules and her needs, but it’s also about you. Come here.”

“I…” Tam swallows, takes a tiny step toward us and stops.

“Both of you, Thomas.” Hearing him use Tam’s real name like that is a bit of a shock. Especially when he utters the words in that gruff, slightly husky voice that rolls right over my skin. I shiver and watch Tam carefully for his response. No one calls him Thomas anymore, except me when we’re in the midst of an argument. How will he react? Does he also feel this same strange connection to Dom that I do?

“Come on, man.” There’s a coaxing edge to Dom’s tone now. “Let’s put the real world out of our heads, for the next few hours at least. This is about the three of us, no one else, and this here hotel room is now our world. Nothing else matters, and in here, anything goes, as long as it’s consensual.” He gestures again for Tam to join us. “Consensual by all three of us. It has to be that way. Or not at all.”

The silence is thick, as if charged with unspoken excitement. The gentle hum of the heating unit pushes at the edges of my awareness and I almost laugh. I doubt the steady flow of warm air is necessary, given the emotional heat raising the temperature in the room.

After a moment, my husband nods and then he’s suddenly there in front of us, grabbing me back out of Dom’s now loosened embrace and leaning in for a kiss of his own.

Whoa! Where did that come from, husband?

Tam’s kiss is fierce, almost punishing, and the most passionate one he’s delivered in at least the past three or four years. It is so different to Dom’s gentle quest. Tam’s lips, his tongue, his whole mouth devours mine, until my brain switches off and all I can do is feel, and lust, and need.

I need this. I need him. I need them both.